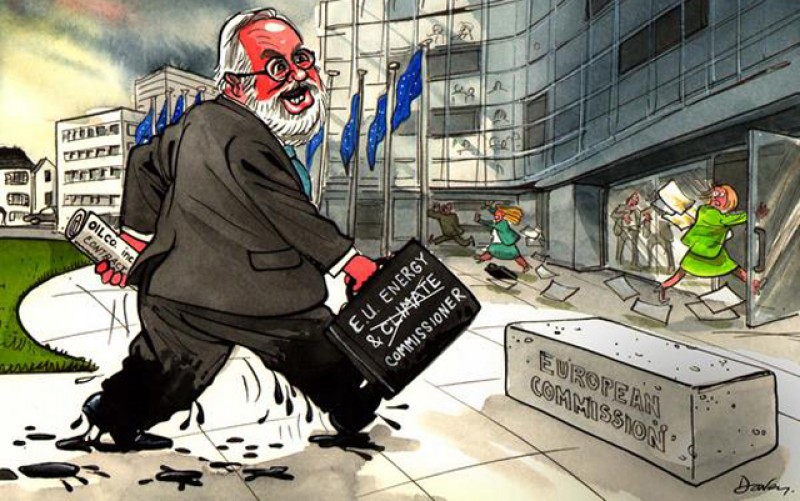 Fresh evidence about the close links between Miguel Arias Cañete, who has been named to take over as the EU’s energy and climate chief, and the oil industry, has been revealed by Friends of the Earth Europe ahead of his hearing in the European Parliament today.

Following concern about his suitability to take on the climate and energy portfolio given his investments in oil companies, Mr Arias Cañete announced he was selling his shares. But Friends of the Earth Europe has uncovered further evidence of his close family connections to the businesses in question which suggests his conflict of interest is far from resolved.

Magda Stoczkiewicz of Friends of the Earth said: “We are deeply concerned about Mr Arias Cañete’s nomination. Last week Mr Cañete sold his shares and said he wanted to avoid even the slightest notion of potential conflict of interest, but with his family’s continued involvement in the same companies the notion remains far more than slight. The European Parliament must scrutinise Mr Arias Cañete very closely – there should be no place for conflict between public and private interests in European decision-making.”

In another development, on the eve of his confirmation hearing an updated version of Arias Cañete’s declaration of financial interests to the European Parliament was published. It now includes his position as president of Partido Popular’s election committee – a job that earned him between €1000 and €5000 per month. According to a spokesperson he “probably forgot” to include the information.

Mr Arias Cañete is Spain’s nomination for the next European Commission which will take over on November 1 for the next five years. He will face questions in the European Parliament on October 1 before MEPs will vote to approve, or not, all 28 proposed Commissioners.

His career has been characterised by numerous controversies and conflict of interests accusations.

On Tuesday last week (September 16), the Commissioner-designate for Climate Action and Energy Miguel Arias Cañete announced he would divest shares he held in two oil companies, both of which he used to be chairman of. In his statement, Mr Arias Cañete explained his actions were aimed “to avoid even the slightest notion of potential conflict of interest”. Yet, Arias Cañete’s divestment does not address the vast majority of the well-documented conflicts of interests of the Commissioner-designate. Now, Friends of the Earth Europe has uncovered more details of Arias Cañete’s connections to the oil sector and the problems these represent to his appointment.

In the case of the two oil companies, called Petrolífera Dúcar and Petrologis Canaris, Arias Cañete maintains very close family ties with the owners and management of these companies. His son Miguel Arias Domecq is a board member of both of them and his brother-in-law Miguel Domecq Solís replaced him as chairman of both companies. His family connections go beyond leading positions in the companies and include a significant ownership of the companies’ shares.

This web of family connections to the oil companies and their shareholders means much more than “the slightest notion of potential conflict of interests” remains, despite Mr Arias Cañete’s divestment.

The murky case of Havorad BV

The largest shareholder in Petrolífera Dúcar and Petrologis Canaris is a company called Havorad BV. Registered in the Netherlands, Havorad does not have a single employee. Spanish public prosecutors called it a ‘shell company’, a company that does not carry out any business activities and only exists for tax and other accounting reasons. Until 2003 Havorad was owned by a company called Gold Lion Corp registered in the Dutch Antilles, a group of islands in the Caribbean known for its attractiveness to companies that want to avoid public scrutiny and transparency of their operations. In its latest annual report for 2013, the company evasively states that, “the Company’s shares are mainly owned by a Spanish individual”. However, the 2012 and 2011 annual reports state, “The Company considers Mr Domecq Solis and his (grand) children to be the shareholders”. No change in ownership is noted.

There is further evidence that Havorad is closely linked to Arias Cañete and his family. According to media reports Havorad became the largest shareholder in two companies that Cañete and his wife had founded. Arias Cañete continued to act as joint administrator of the two companies between 1996 and 2000, after Havorad had acquired the shares. Two companies currently owned by Havorad are run by members of Miguel Domecq Solís’ family. Miguel Domecq Solís is also one of the four current directors of Havorad. Three other seats are held by trust officers and tax experts making Miguel Domecq Solis the only director with a personal interest in the company.

The code of conduct for European Commissioners states: “A Commissioner shall not deal with matters within his/her portfolio in which, she/he has any personal interest, in particular a family or financial interest which could impair her/his independence”. The clear and strong links between Miguel Arias Cañete’s family and the oil sector would exclude him from any decisions regarding the sector.

Friends of the Earth Europe does not believe that by divesting last week Mr Arias Cañete has resolved his conflicts of interests and remains highly concerned about his appointment as European Commissioner for Climate Action and Energy. The European Parliament should ensure that any candidate appointed for the job is free of conflicts of interest and demonstrates impartiality and convincing qualifications in the area of his/her appointment.