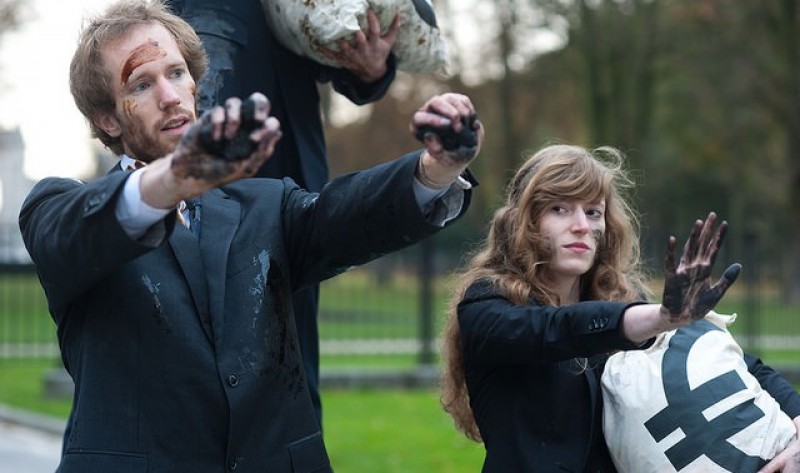 European governments are tonight claiming to have agreed ambitious action to cut greenhouse gas emissions, boost renewables and reduce energy use by 2030.

But the targets set by the EU's 28 heads of state are far below what is necessary and what could be done by Europe to combat climate change, according to Friends of the Earth Europe.

The deal commits the EU to cut emissions by at least 40%, provide at least 27% of the EU's energy from renewable sources, and reduce energy consumption by at least 27%.

Brook Riley, climate justice and energy campaigner for Friends of the Earth Europe, commented: "To describe 40% emissions cuts as adequate or ambitious, as EU leaders are doing, is dangerously irresponsible. 40% is off the radar of climate science. This deal does nothing to end Europe's dependency on fossil fuels or to speed up our transition to a clean energy future. It's a deal that puts dirty industry interests ahead of citizens and the planet."

Only the 40% emissions reduction target will be broken down into 28 nationally binding targets. The renewables target will be binding at EU level, and there is no clarity how it will be implemented. The energy savings target is only indicative.

The 27% target for energy efficiency ignores analysis by the European Commission showing that higher ambition is better for jobs, the economy and energy security.

Brook Riley continued: "A 27% non-binding energy savings target means slowing down progress on energy efficiency at a time when Europe is facing energy insecurity and is considering dangerous and costly alternatives, like shale gas, tar sands and nuclear, to meet demand."

Molly Walsh, climate justice and energy campaigner at Friends of the Earth Europe said: "The renewable energy target represents barely more than business-as-usual and will send a dangerous signal to national governments that EU renewables policy is being abandoned. The EU can achieve a much higher share for renewables by involving citizens in producing and controlling their own energy but this potential is being blocked by dirty energy corporations."

Friends of the Earth Europe believes three binding targets is the only way to ensure Europe effectively fulfills its responsibilities to tackle climate change. Emissions must be reduced by at least 60% by 2030 to deliver the EU's fair share of action and be in line with the latest science, and there must be binding targets to reduce energy use by 50% and increase the share of energy produced by renewables to 45%.

Additionally, the EU needs to provide new, additional financial and technological support for climate action in developing countries. Only action on this scale will bring about the energy transition needed to avoid the worst consequences of climate change.