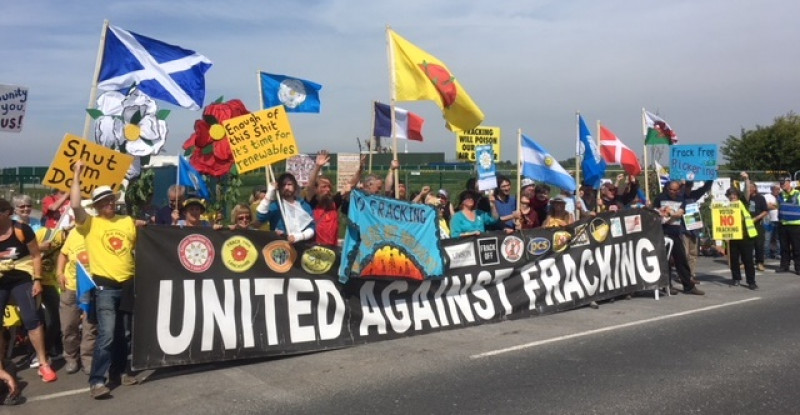 Battle to resist fracking in UK heats up in Lancashire

For the past 7 years, residents of Lancashire in North West England, supported by allies from across the UK and Europe, have led a remarkable campaign to protect their communities from fracking. Local businesses, health groups, trade unions and others have joined them.

One year after Friends of the Earth Europe’s AGM visited Preston New Road’s fracking site last May, in solidarity with local residents on the front line of a #FossilFree Europe, we take a look at what has happened since.

Cuadrilla have applied for fracking consent

Fracking involves firing a mix of water, sand and chemicals down a well to extract gas or oil from under ground. But it poses risks to local people and the environment, as well as contributing to climate change.

Fracking still has not taken place as of June 2018, resisting 7 years of threats. Protestors have successfully held off fracking company Cuadrilla from starting its fracking operations at Preston New Road, Lancashire - which would be the first in the UK.

Protest has been ongoing each day of operations, and Friends of the Earth England, Wales & Northern Ireland has continued to attend the site with protesters to make a stand against fracking in Lancashire.

But the campaign is now reaching crunch point. The Westminster government has overturned the local government’s democratic decision to say ‘no’ to fracking. And now Cuadrilla has applied to the UK government for final consent to start within weeks - asking for final Hydraulic Fracturing Consent. Friends of the Earth have a petition to ask the minister to reject this: https://act.friendsoftheearth.uk/act/put-stop-fracking.

Friends of the Earth’s legal team has however spotted a big problem with an environmental permit that the government’s regulator gave to Cuadrilla. So Friends of the Earth are suing the Environment Agency in the UK High Court - demanding that consent for fracking cannot be given while this legal challenge is live, which would of course delay Cuadrilla’s plans at least until a hearing took place.

In a very significant move the UK government have made proposals to change planning laws which would significantly reduce the ability of communities and local councils to reject fracking applications. This is a serious threat to the country and would make it much easier for fracking firms to drill for oil and gas.

Cuadrilla apply for an injunction against protest

Within the same week that the government proposed disgraceful changes to the planning permission for fracking, and that Cuadrilla applied for final fracking consent, Cuadrilla also applied for an injunction to restrict protest at the site. The impacts of this remain to be fully recognized, but it seeks to prohibit what is described as unlawful “obstruction” of the site entrance and adjacent road.

Local people are as determined as ever to stop fracking. They have just taken part in a blockade over the whole weekend with hundreds of people joining them. The communities of Lancashire are going to continue to show that they don’t back fracking.

They’ve done an incredible job so far and shown the government and the fossil fuel industry that no matter what they do to try and force fracking on the country, they will be met with sustained opposition. The strength and duration of such resistance has shocked the industry and will be a huge factor in making sure fracking never has a viable future in the UK.

Keep up to date by following: