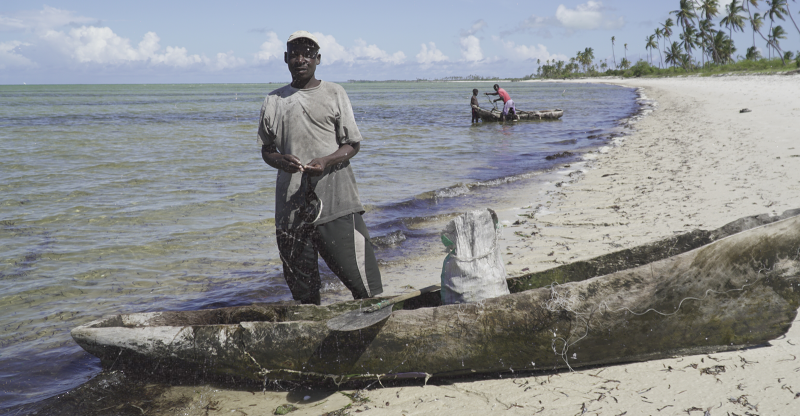 Coronavirus hasn’t affected everyone equally. We're sharing stories from across our European and global network of what lockdown and life under coronavirus look like around the world. Hearing from those who are among the worst affected, and how they are taking action

Two thirds of Mozambique’s COVID-19 cases have been diagnosed in Cabo Delgado – one of Mozambique's poorest and most vulnerable regions – making it the epicentre of the pandemic in the country.

Why? Because even after the pandemic hit, companies like Total and Shell refused to halt work on climate-wrecking gas projects in the region, putting workers and local communities at risk. 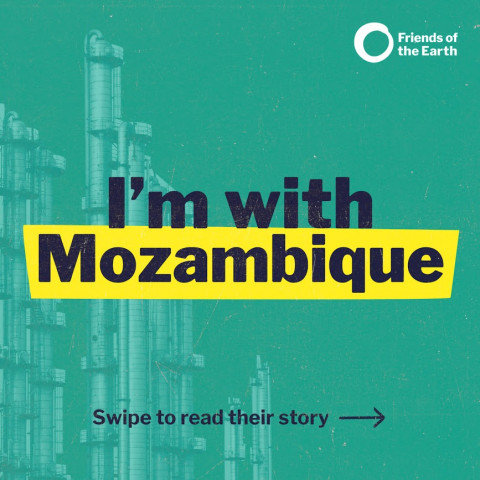 The first confirmed case of coronavirus in the country was a foreign employee at Total’s construction site, from where it spread throughout the region. Although Total’s infected employees are isolated on site; cooks, cleaners, security guards and other staff are brought in daily from the surrounding villages to serve them.

While Total has started to test their own employees, inadequate efforts have been made to test and protect local communities. 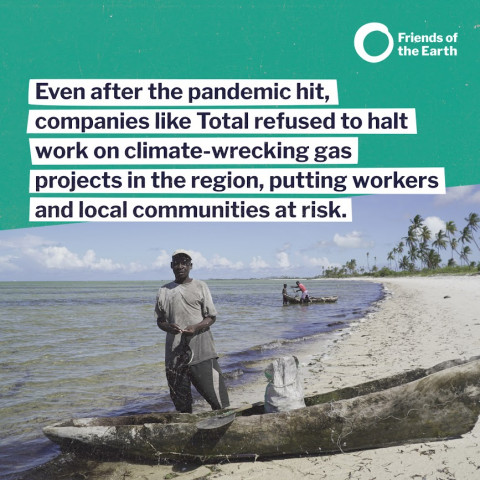 The gas projects were already proving to be a human rights disaster, not just because of their contribution to climate breakdown but because “development” in the region has seen hundreds of local families displaced.

Despite boasting of their alleged concern for the environment, fossil fuel companies are working on gas projects that will worsen the climate crisis and destroy endangered species of coral and fish off the coast of Cabo Delgado.

Transnational corporations have already forced over 550 families from their homes, grabbed their land and cut off their access to the sea. They have razed entire villages to the ground, leaving communities without livelihoods, creating a food crisis. And the projects are implicated in corruption, violence and human rights abuses.

The government’s response of dispatching the military to counter violence by insurgents and extremists has only instilled more fear in the very communities. Meanwhile journalists have been arrested or disappeared for reporting on abuses. 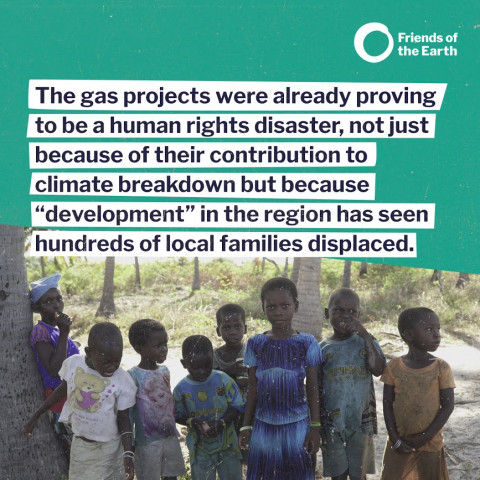 The gas industry must pull out of Mozambique now, before more damage is done.

We support Friends of the Earth Mozambique’s demands that the government stops gas and fossil fuels exploitation in Mozambnique, and choosing a path of community renewable energy instead. And that the government releases journalists and ceases all random arrests and detentions of activists and innocent civilians.