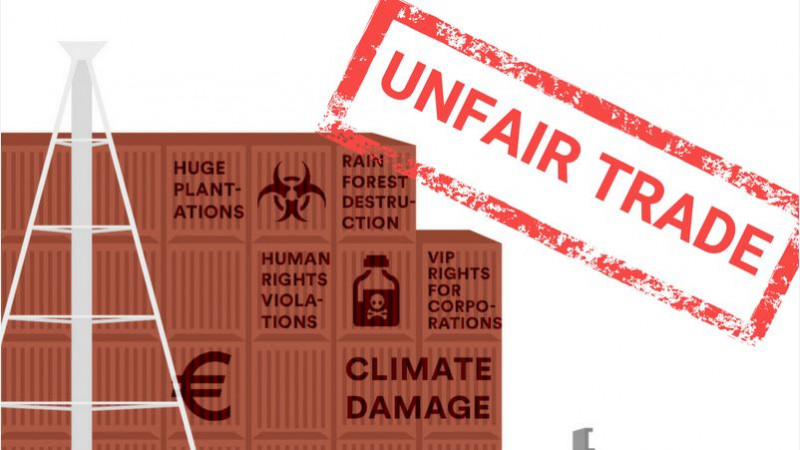 Friends of the Earth Europe's new analysis of the EU-Indonesia CEPA trade deal gives it a score of 4.5/20 for sustainability

While public discourse is focussing on tariff fights between US and China, the EU Commission continues to negotiate non-transparent and harmful trade deals.

This week, the 5th round of negotiations between Indonesia and the EU for a free trade agreement are taking place in Brussels. The fact that there was no public announcement of this week's talks with Indonesia highlights the lack of transparency surrounding the negotiations.

Friends of the Earth Europe has analysed the draft texts of the deal – known as CEPA – and conducted a 'sustainability check' to assess how much it would support a fair and equitable economy.

The agreement scores only 4.5 out of 20 points – a clear fail. The main findings are:

"Granting unjustified privileges to corporations and harming local economies and small-scale farmers, the EU-Indonesian deal proves yet again that the EU is putting profits over people in its trade strategy. Although the EU continues to talk about its so-called sustainable trade policies, this agreement miserably fails the sustainability check and should be rewritten completely to focus on protecting people and planet."

Civil society organisations from Indonesia and the EU are meeting in Brussels to highlight the flaws of the negotiations and demand a trade relationship based on sustainability and equity. On Wednesday they will hand a petition signed by more than 170,000 European citizens to the cabinet of Commissioner Malmström asking for palm oil to be excluded from the negotiations.

[1] Indonesia is the world's fourth most populous country, but trade with the EU is relatively low. The Commission aims to "facilitate and create new market access, increase trade between the EU and Indonesia as well as to expand direct investment." Civil society organisations published a statement about the negotiations during the last round.