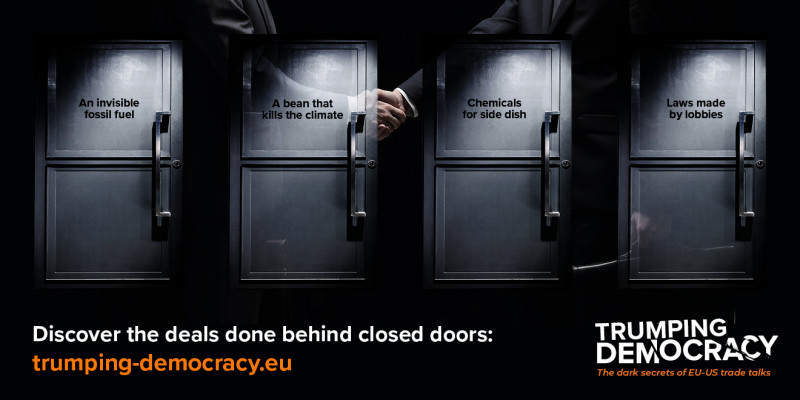 Toxic EU-US trade deal back from the dead

Millions of people all over Europe protested against the transatlantic trade agreement TTIP in 2015 and 2016, warning against the threat it posed for European standards in agriculture, the food system and other areas. With Trump’s election as US president in 2016, the trade negotiations became dormant - but they were never formally buried.

On 25th July 2018, the “Trojan Horse Treaty” was woken from the dead when then EU President Juncker and Trump signed a joint trade statement. Trade negotiations between the EU and the US were rolling again.

A Tale of Two Mandates

Mandate No 1 is about the elimination of tariffs for industrial goods only, excluding agricultural products. No 2 is an agreement on “conformity assessment”, a procedure to assess if products meet technical requirements both in the EU and the US.

In May, July and September 2019, there have been three discussions between EU and US trade experts, without any public record.  Nevertheless, most of the negotiations are actually happening outside of those two trade mandates. Aside from the two official areas of work, the European Union is discussing with the Trump administration about trade in soybeans and gas, food safety standards and other issues very relevant for all EU citizens. In July, the European Commission stated:

The more handicapped we are on our negotiations on tariffs with the US, the more we will need to work on regulatory cooperation

Regulatory cooperation is a political discussion by trade officials on standards in areas such as environment, chemicals, cars, health, etc. So what the Commission was saying, in simple words: “Since we are stuck in the tariff discussion, we are now opening up to negotiating our standards with the US.”

The dialogues between the EU and the US on standards are happening behind closed doors, with no representatives of parliaments and with little public scrutiny. Often, they are framed as technical voluntary discussions between experts. But the political reality is that they serve to align and harmonise standards and approval processes between the EU and the US. Since the main aim for this is to stimulate more trade and reduce costs for business, it creates strong pressure to lower existing or weaken new standards.