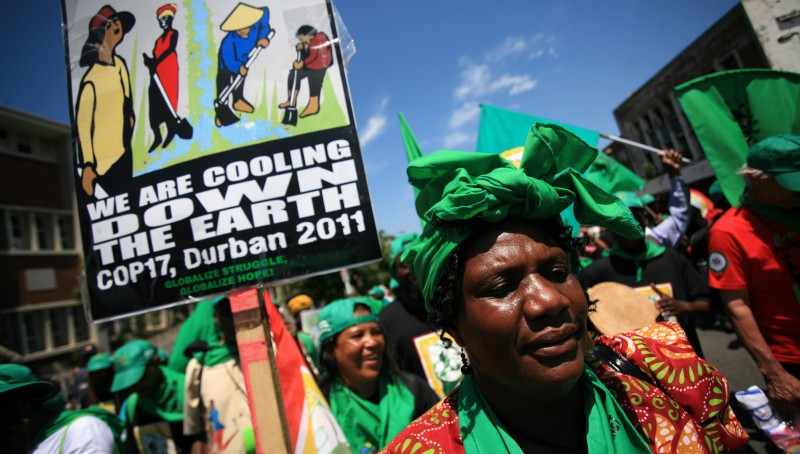 What is food sovereignty?

Food sovereignty is the right of people to define their own food and agriculture policies.

This means that they must be able to protect and regulate domestic agricultural production and trade, determine the extent to which they want to be self-reliant, and restrict the dumping of cheap imported products in their markets. Also, fisheries-based communities must be given the rights to manage their own aquatic resources.

Food sovereignty does not negate trade, but rather promotes the formulation of trade policies and practices that serve the rights of peoples to safe, healthy and ecologically sustainable food production.

The increasing number of hungry people around the world, the concentration of food processing and marketing in the hands of only a few companies, and the ongoing depletion of natural resources are all important reasons why we should embrace food sovereignty.

What are the principles of food sovereignty?

The right to food

The right to food is a human right which is not fulfilled for hundreds of millions of people. Food sovereignty can give all people the right to food. In practical terms, this would mean every man, woman and child having physical and/or economic access to adequate food.

Farmers, fisher-folks, pastoralists, herders, gatherers, indigenous peoples and other food producers should have the right to access their local land, water, seeds, genetic resources, and biodiversity. It means an end to land grabbing. It excludes excessive control and the export of resources and raw materials from developing countries.

Food sovereignty does not give anyone the right to destroy the environment, reduce biodiversity or reduce natural resources for future generations by any other means. This implies sustainable use of available resources and the prohibition of practices that pollute the environment.

The rights for consumers

Food sovereignty also gives consumers the right to be able to choose healthy, locally produced and organic food products according to their culture and preferences.

Politics for people and planet

Food sovereignty implies that public policies must be coherent and promote and protect food systems and food cultures. Food sovereignty promotes trade policies and practices that give people the right to safe, healthy and ecologically sustainable production. It prioritises local and national markets.

Trade cannot be seen as an objective in itself but rather as a tool to provide people with adequate food. Food sovereignty does not negate international trade, but much of this trade is not ecologically sustainable and needs to be reduced.

Mechanisms must be developed to regulate international trade and markets to guarantee fair prices to producers, prevent ecological damage, and guarantee food sovereignty.

As part of our vision, we play an active role in building a movement for food sovereignty across Europe.

First proposed by the International Peasant movement La Via Campesina in 1996, it has since grown into an organizationa movement and framework for organising food and agricultural policies locally, regionally and internationally.

The European Food Sovereignty Movement consists of European farmers, civil society organisations, and local initiatives that spread the concept and are united by the desire for food sovereignty. Friends of the Earth Europe is part of the steering committee of the movement in Europe.

Today, the movement is bound together by the declaration of Nyéléni, a document that endorses a united movement with collective objectives to change food and agriculture policies both in Europe and around the world. The declaration was endorsed by more than 300 national representatives of European countries and signed by more than 150 civil society organisations.