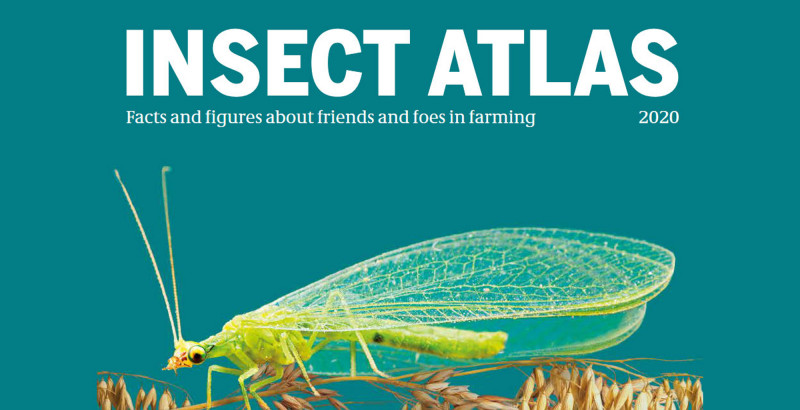 New report shows nature-friendly agriculture is necessary and possible, but farmers need support for the transition

Insects are in decline across the world because of industrial farming and heavy pesticide use which are threatening food production, according to the Insect Atlas released today by Heinrich-Böll-Stiftung and Friends of the Earth Europe.

Insects keep the planet's ecological system running, and ensure our food supply - 75% of our most important crops depend on pollination by insects. Insects also improve soil quality and reduce plant pests by decomposing manure and dead plant matter.

The Insect Atlas shows that insect species and pollinators are in severe decline because of pesticide-dependent industrial farming. It reveals that:

Mute Schimpf, food and farming campaigner at Friends of the Earth Europe said: "The evidence is clear: pesticide use is wiping out insect populations and ecosystems around the world, and threatening food production. A handful of corporations control the bulk of pesticide supply, and if left unchecked will continue to use their immense political influence to lock in a system of industrial farming which will continue to wipe out nature and destroy rural communities."

Barbara Unmüßig, President of Heinrich-Böll-Stiftung said: "The global loss of insects is dramatic. Industrial monocultures with energy or fodder plants for our factory farming are driving, in countries such as Brazil or Indonesia, deforestation, monotonous agricultural deserts and the unlimited application of pesticides. In Argentina alone, the use of pesticides has increased tenfold since the 1990s. Pesticides from major chemical companies such as Bayer and BASF, which have long been banned or are no longer licensed in the EU, continue to be traded globally almost without restriction. As a result, nearly 50 percent of the pesticides in Kenya and over 30 percent in Brazil are highly toxic to bees. The Mercosur agreement too negotiated a tariff reduction for chemical products, including pesticides. The goal of exporting even more pesticides to the world's most biodiverse regions mocks all national sustainability effort."

The Insect Atlas also shows how the EU can support sustainable models of farming which prevent insect collapse and guarantee food production and good livelihoods for farmers and farmworkers. These include:

Barbara Unmüßig continued: "The Biodiversity Strategy and Farm-to-Fork initiative are first steps into a sustainable transition of the European agricultural sector. But ist not sufficient - in order to protect insects we not only need good intentions, but very specific and targeted strategies. The CAP has to be reshaped to finally contribute tangibly and decisively to an insect- and climate-friendly agriculture. Just 20 percent of all producers in Europe get 80% of CAP subsidies – this can not be justified any longer. Large area subsidies from which only a few big farms benefit have to be redirected into supporting small, environmentally and socially viable farming."

In order to achieve the fundamental shift needed to save insect populations, the European Parliament and Council must drastically increase the ambition of the European Commission's Farm to Fork and Biodiversity Strategies. [3]

Friends of the Earth Europe and Heinrich-Böll-Stiftung are calling for a new law to cut pesticide use by 80% by 2030, as well as other measures to prepare the way towards fairer and greener food systems.