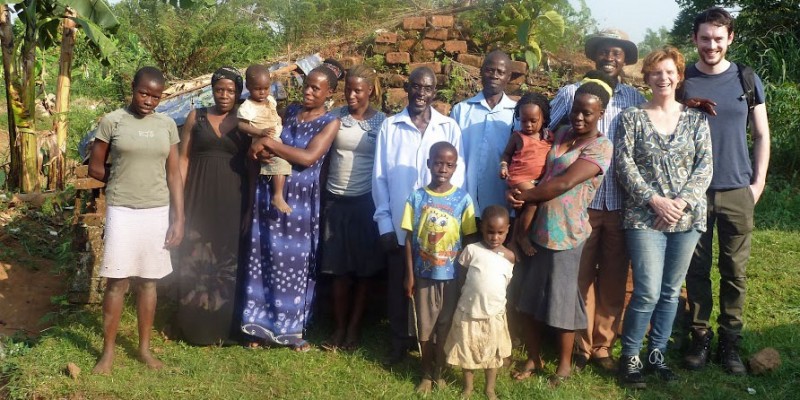 No news is bad news: land grabs and palm oil expansion in Uganda

In January, Anne van Schaik, accountable finance campaigner at Friends of the Earth Europe visited Uganda to talk with local communities and leaders on the effect of a palm oil plantation project in two islands in Lake Victoria and plan the next steps in a Friends of the Earth campaign against the financiers of landgrabbing.

Uganda is one of the countries of the new frontier of palm oil destruction in Africa: as in Nigeria, Cameroon, and Liberia, South-East Asian palm oil companies are leasing or buying land to produce palm oil, thereby causing the same destructive effects on communities and the environment as have been seen in Indonesia and Malaysia.

In Uganda, the oil palm giant Wilmar International is developing palm oil plantations in the highly biodiverse Kalangala islands and in Buvuma, another island in Lake Victoria. The project is a partnership between Wilmar, the Ugandan government, the International Fund for Agricultural Development (IFAD) and the Kenyan oilseeds company Bidco. The agreement commits to planting 40,000 hectares of palm oil in total.

Affected people we spoke to in Kalangala and Buvuma told us stories of how they lost their land to the project and received inadequate compensation – if any – and are now therefore unable to provide an alternative livelihood. The local elites on both islands have little concern for their livelihoods, and instead joke about how men drank away their compensation money in bars, got themselves a second wife or otherwise managed to fritter it away. Or they scold communities for having signed the agreements in first place, only to start complaining later. 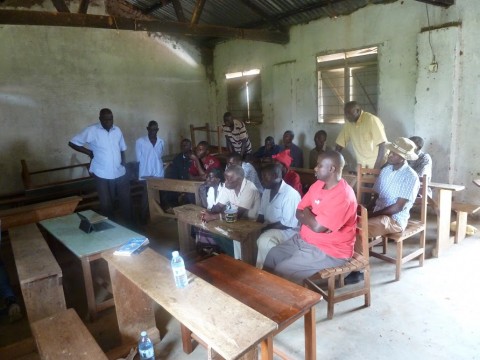 In Kalangala, we visited the house of John Muyiisa, who witnessed how his land of 43 acres was taken for the palm oil project and has since then not stopped fighting to get it back. John showed us the state of his house, which is about to collapse because he doesn't have the resources to repair it. The foundations of the new house he was planning to build for his family have been left abandoned since Wilmar moved in.

When he showed us the small plot that was left to him, John said: "We all depended on this land. My land was not only my income but also a secured future income for my children. It would have provided me with the money I needed to buy a new house. Now I have lost my land and our plans are shattered".

Besides the effect on communities, the oil palm development has also led to serious environmental degradation. In Kalangala, an estimated 3,600 hectares of natural forest have been destroyed to make way for the palm oil plantation. Now people are encroaching on the remaining forest for timber, food and medicine. 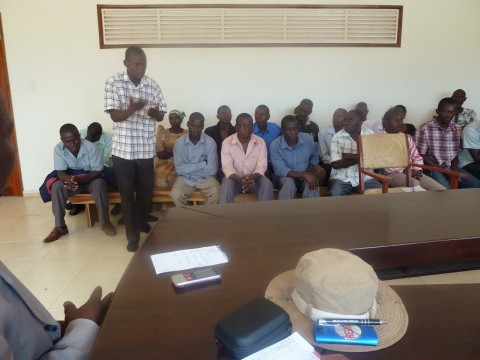 Before we are allowed to speak with communities in Buvuma we had to go through the local elite, and justify to them why we were visiting the island. When we expressed our interest to hear from the community about the effects of the palm oil projects, they exhausted themselves by explaining the benefits of the project: there will be electricity, employment, new roads, and extra income for local palm oil growers. To us, this sounds all-too familiar to what we heard during a visit in 2013, but not much seems to have happened over the last two years.

Once we had persuaded them to let us in, we joined a community meeting at the district house to discuss compensation for lost land, in the presence of the local elite. When the chairperson gave people the floor to talk about the effects of the project, many raised their hands. They started to talk about how compensation was inadequate, how it is totally unclear to them what calculation method was used and how some of them didn't want to leave their land but were given no choice.

Clearly embarrassed and annoyed, the deputy resident district commissioner responded and corrected them. People should not first sign an agreement, and then complain, he said. He referred to the many committees there are for bringing complaints, and promised to reveal the calculation method.

Local NGOs and community leaders are concerned about the food security situation on both islands. While there is enough food for now, when the palm oil project takes off and the palms start to grow, no food crops will be able to be grown beneath their canapé. In Buvuma, according to the local elite, the palm oil project will take up 10,000 hectares, almost half of the available 22,0000 hectares of agricultural land on the island. It is not clear how this loss of agricultural land will be dealt with. 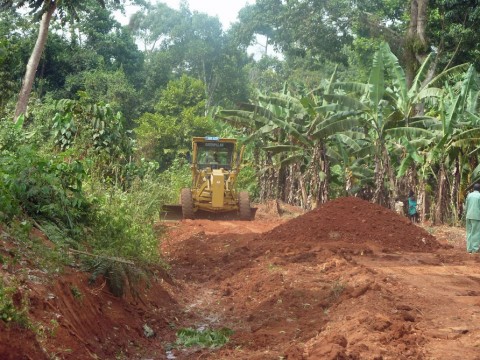 Support from NAPE/Friends of the Earth Uganda

NAPE/Friends of the Earth Uganda has supported the communities on Kalangala and Buvumba since the start of the project in 2011. They have provided legal training on both islands and established a committee which confirmed Friends of the Earth's allegations of land grabbing, and put forth demands that land taken from community members should be returned to them along with compensation for lost crops. To date, their recommendations have fallen on deaf ears.

Since then, Wilmar has adopted a policy of "No peat, No Exploitation and No Deforestation". All of their financiers already had a sustainability policy.

What we observed during our time in Uganda, and the reports that we have heard out of Uganda over the last few years, clearly shows how voluntary standards are not enough: we cannot expect companies and financiers to regulate themselves. We need binding standards for financiers in Europe, as well as to reduce the growing global demand for palm oil in general.

If you want to support John Muyiisa's struggle in his search for legal redress, please help here.