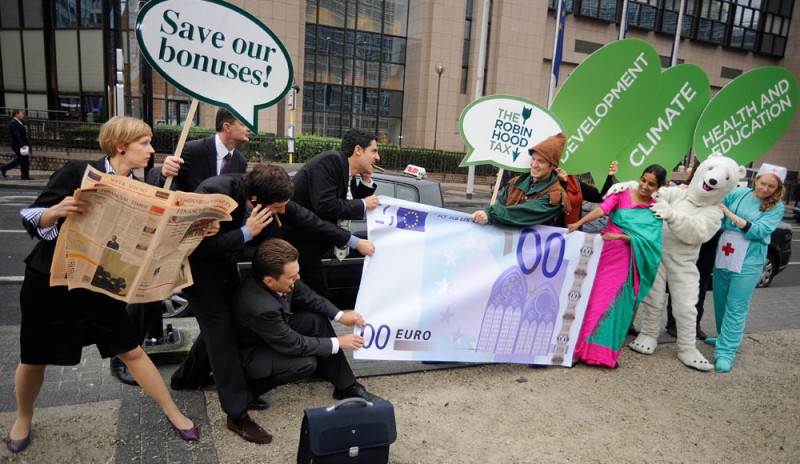 Brussels, September 7 - A broad coalition calling for a European-wide Financial Transaction Tax (FTT) staged an action outside the meeting of EU Finance Ministers today, in Brussels. The group, made up of NGOs, political organisations and trade unions, called on EU Ministers to recognise the merits of an FTT, particularly as austerity measures begin to be felt throughout the EU.

The coalition was concerned about the European Commission ‘non-paper’ tabled for discussion by Tax Commissioner Algirdas Šemeta and urged Ministers to dismiss its negative assessment. Whereas the EC document questions the feasibility of an FTT without giving detailed reasons, a leaked paper by the International Monetary Fund and leading economists do state this sort of tax is possible.

The coalition staged an action to represent what is at stake, pitting greedy bankers against actors representing the developing world, workers in Europe and the environment. Some 200 billion Euros could be raised from an EU-wide transaction tax, according to the Austrian Institute of Economic Research. Campaigners believe that part of this money should support public services at home, fight overseas poverty and fight climate change.

Elise Ford, Head of Oxfam’s EU Office, said: “It’s brutally unjust that the poorest people on earth are made to pay the price for bankers’ greed through cuts in schools or life-saving medicines. A tax on financial transactions would make the banks foot the bill for the misery they have caused.”

Daniel Pentzlin, campaigner for Friends of the Earth Europe, said: “It is time for a new tax system where we tax what we want to reduce: pollution, greenhouse gas emissions, unsustainable production as well as excessive speculation. The finance sector, making billions each year, must contribute its fair share to the costs of climate protection and the urgently needed transformation of our economies towards a low resource society.”

Poul Nyrup Rasmussen, President of the Party of European Socialists (PES), on behalf of Europeans for Financial Reform, said: “It is simply not feasible for conservative finance ministers to complain about the deficit and then to refuse an entirely feasible way of generating new revenue. The Financial Transaction Tax is urgently needed”.

Visit the Friends of the Earth Europe FTT page