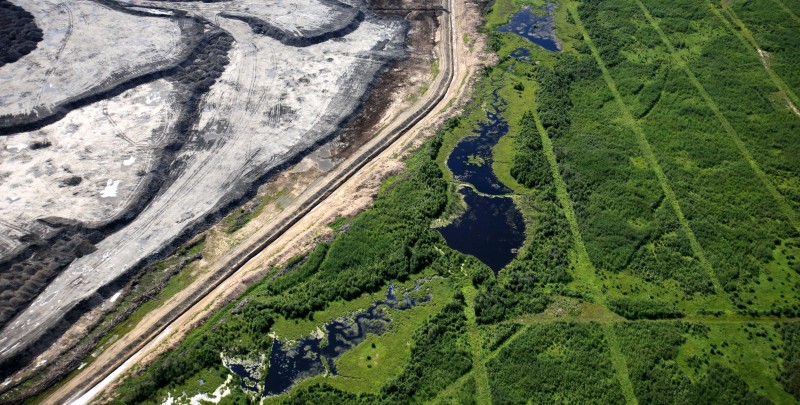 Tar sands are a naturally occurring mixture of sand or clay, water and an extremely dense and viscous form of petroleum called bitumen. The process of converting tar sands into fuel releases three to five times the greenhouse gas emissions of conventional oil – reflecting the vast amounts of energy required in the process. The pollution, deforestation and disturbance to wildlife from tar sands development threaten the traditional livelihood and wellbeing of indigenous communities.

Canada is the current epicentre of tar sands production, and represents the second largest oil reserve in the world. With an estimated 170 billion barrels of recoverable oil, beneath the world's largest carbon sink – the boreal forest – Canada's tar sands have the potential to rearrange the geopolitics of oil, whilst destroying the land and livelihoods of First Nations communities. Tar sands extraction is jeopardising Canada's climate change commitments, and undermining its ability to meet Millennium Development Goals 1, 3, 7 and 8.

In Canada, First Nations communities located close to the tar sands suffer a higher proportion of cancer, and other diseases like lupus and multiple sclerosis. We support their fight against further developments and their struggle to rectify the continued disregard shown by the Albertan state government.

The devastating extraction of unconventional oil resources is about to go global. New deposits of tar sands and other unconventional oil have been discovered, or are already being exploited, in countries including Venezuela, Madagascar, Republic of Congo, Russia, Jordan, Nigeria and Angola. In countries with weaker political and environmental governance frameworks, the consequences of tar sands expansion are likely to be even more devastating.

Progress towards Millennium Development Goal 7, on Environmental Sustainability, will be seriously under threat from the development of tar sands. This will especially be the case in Africa, a region already highly vulnerable to the impacts of climate change, and compounded by conventional oil extraction over the last few decades.

Countries in the global south, which lack strong governance and legal frameworks to protect their resources and people, will face even bigger challenges to deal with the tar sands curse.

Friends of the Earth Europe condemns this form of environmental injustice, and demands that: