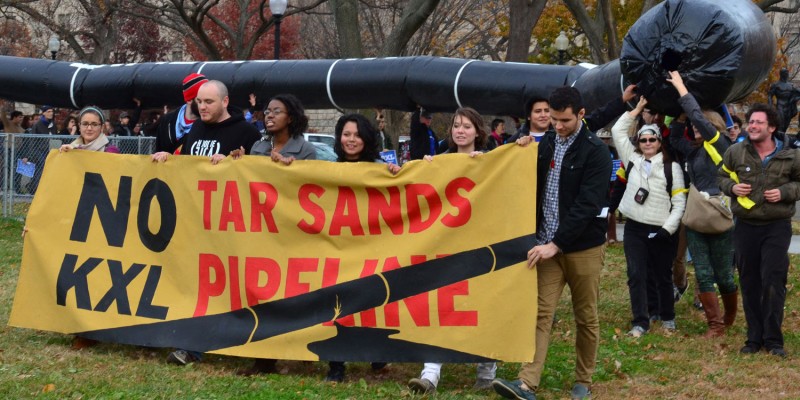 After the Paris climate agreement, which recognises the need to keep the world within 1.5 degrees of global warming, massive and urgent action is required by both Europe and the United States to avoid catastrophic global warming – by ending their fossil fuel addiction.

EU-US trade talks (previously TTIP), backed by fossil fuel lobbyists, threatens to lock Europe into a fossil fuel future by hindering the transition towards clean energy. It would empower dirty energy corporations to put roadblocks in the way of effective climate action and would encourage fossil fuel imports for decades to come – indeed there is evidence that the negotiations have already been used to push tar sands imports into the EU.

The fight against climate change is yet another reason to stop TTIP.

A trade agreement to lock in a fossil-fuel future

"Energy needs to be a key part of Trans-Atlantic Trade and Investment Partnership discussions... and we need gas to be traded freely across the Atlantic.'' Miguel Arias Cañete, EU Climate and Energy Commissioner

The EU wants access to fossil fuels from the USA, and is trying to use trade talks as a means to get them, potentially locking the EU into decades more of fossil fuel use and postponing the day when its energy is entirely from renewables.

After many years of restricting exports of fossil fuels, the massive expansion of fracking has seen the USA become a fossil fuel exporter – including to Europe. And the EU wants to use TTIP to keep it that way.

The dirty fuel most likely to arrive from the USA to the shores of the EU is Liquefied Natural Gas (LNG). LNG is sold as a supposedly 'cleaner' fossil fuel but can be as polluting as coal, particularly as it would likely derive from fracked shale gas.

As well as emissions from fracking and burning the gas, large-scale LNG imports into the EU would also create extra greenhouse gas emissions from transport and processing. It is very energy intensive both to cool gas down to the extremely low temperatures required to transport it, as well as to re-gasify it after arrival. And, of course, transporting it across the Atlantic burns even more fossil fuels.
LNG imports would also mean massive new investments being planned to process (re-gasify) it and transport it around Europe. These investments create irresponsible, polluting lock-ins: they would cost up to billions of Euro, take years to pay off and stay in place for decades.

If the EU does decide to break its fossil fuel addiction, it will need to vastly change its energy infrastructure, requiring both massive new investments and a range of new policies to support the transition.
However, through trade agreements like the EU Canada-Agreement (CETA) and the proposed TTIP, the EU would be faced with the possibility of being sued by Canadian or US corporations using the powerful Investor State Dispute Settlement mechanism (ISDS) – recently rebranded as Investment Court System. ISDS will allow fossil fuel corporations to sue European governments, outside of European court systems, if they feel their profits have been affected – even if these actions have been taken to prevent catastrophic climate change. The EU and its member states face the prospect of being sued – like the US government has been under the North American Free Trade Agreement (NAFTA) for blocking the Keystone XL tar sands oil pipeline (see below) – for potentially billions of dollars if they act to prevent a fossil-fuelled future. Europe's energy transition will face yet more hurdles if continues to give more opportunities to fossil fuel corporations to stop the climate action.

Overall, a particularly high number of ISDS cases concern energy-related issues, highlighting the particular dangers of ISDS to energy policies and investment protection is already used by fossil fuel companies as a lobbying tool to ensure governments do not move away from fossil fuels.

In France, for example, former Minister Nicolas Hulot passed a law in 2017 to try to phase out fossil fuel extraction on French territory. But Canadian gas company Vermilion threatened the French Council of State with an ISDS case. This was one of the reasons why the "Hulot law" ended up without real teeth and with no real climate impact.

The Keystone Case – TransCanada sues US government for $15 billion

In January 2016 TransCanada, the Canadian company behind the Keystone XL pipeline project announced their intention to sue the US government for $15 billion for blocking its construction. This followed the announcement in November 2015 from President Obama that the US government was not going to approve the pipeline, citing the threat of climate change. The Keystone XL pipeline was designed to transport climate killing tar sands from the Canada to oil refineries on the US Gulf Coast, enabling its export around the world – including to Europe. After his election Donald Trump approved the pipeline and the company dropped the case but the campaigning continues by civil society to stop both the Keystone pipeline and destructive trade deals.

Alongside the possibility to sue governments when they take climate action, fossil fuel corporations may also get a new say over EU climate and energy policies through so-called Regulatory Cooperation – part of the EU-US trade talks.

The proposals outlined in the TTIP negotiations, would involve proofing new regulations for the trade and investment friendliness, seeking 'harmonisation' of standards, and providing new opportunities for the US government and US and EU fossil fuel lobbyists to slow down or weaken the development of legislation to protect the climate even before the European Parliament or Member States see them.

Meanwhile measures, such as labelling, to incentivise more climate-friendly policies could be challenged as 'technical barriers to trade' under current proposals

''Under TTIP proposals now on the table, government policies to incentivize more environmentally sustainable goods and services—even with voluntary labelling—can be challenged as illegal "technical" trade barriers. Countries that lose such cases could face millions in sanctions unless they eliminate the regulations.'' Joseph Stiglitz, Nobel laureate

EU-US trade talks are a product of lobbying by big business and it is no surprise that this lobbying includes the major oil and gas companies and their lobby associations. Already, they have used the negotiations for TTIP, and the proposed EU – Canada free trade agreement (CETA) to undermine climate action by acting to prevent adequate EU regulation of tar sands (see Dirty deals: How trade talks threaten to undermine EU climate policies and bring tar sands to Europe) Now, companies like Chevron and BP will continue to push for more trade agreements to continue Europe's fossil fuel dependency.