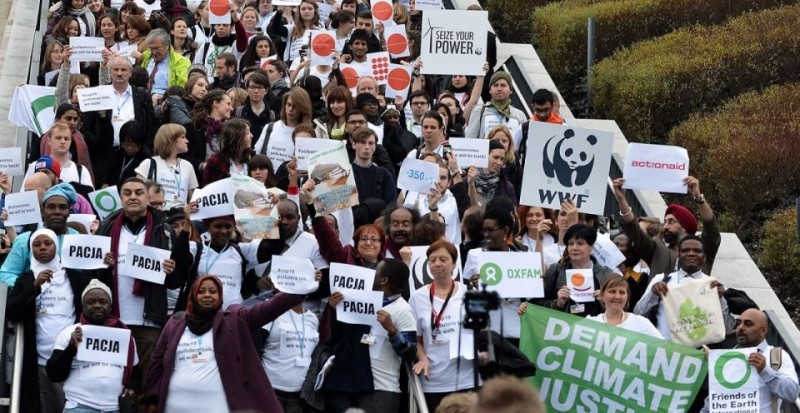 Civil society walks out of the COP19 in Warsaw (c) FoEE

Climate Myth #1: Big business is part of the solution

In the run up to the COP21 UN climate talks in Paris this December, we're busting some commonly-heard climate myths, from shifting the blame to India and China to putting our faith in techno-fixes.

This first myth to kick off our series is one of the most recurring catchphrases of CEOs, lobbyists and sadly, most of our politicians.

This myth goes a little something like this: big business is changing. Big business wants to be part of the solution. Big business is taking steps to cool the world. We need to reward efforts and include major corporations in decision-making. Sometimes we even hear that it's up to big business to "save us" now, because world leaders have proven their incompetence or unwillingness. Every year, at every COP (Conference of Parties, the annual UN climate talks), it's the same old story.

Despite constant calls for more inclusion of corporations, a closer look shows us they're hardly excluded at all in the first place.

A striking example of the overwhelming presence of big business is the COP 19 that took place in Warsaw in 2013, when civil society walked out of the talks to protest intense corporate lobbying.
The brands of the dirtiest corporations in the world could be seen everywhere at the COP, sprawled on the conference center and on by-products. The Executive Secretary of the talks, Christiana Figueres, actually took time off from the negotiations to give a speech at the World Coal Association conference.

At the national and regional levels, all political climate initiatives are systematically targeted by lobbying. Big fossil fuel companies spent millions of euros to bring down political ambition in the EU climate & energy 2030 package as much as possible. In every one of our countries, big corporations are involved in decision-making process to water down laws and environmental regulations.

It seems these constant calls for an increased "inclusion" of major corporations are more rhetoric than actual concern - designed to justify their current involvement.

2. Is the inclusion of big business a "democracy issue" ?

One could argue that as actors of "civil society" (in the broadest definition possible of the term) they should have a voice at the table. But when we take into account that the means of corporations are infinitely superior to communities, grassroots organisations, non-profits, scientist organisations, etc, we should ask ourselves, is "equal" representation actually fair? We simply do not have the same leverage. Impacted communities cannot spend millions of dollars to lobby decision makers, sponsor international conferences or hire lawmakers to draft tighter environmental legislation.

Can we really pretend these huge inequalities don't exist? Restricting corporate influence - rather than enabling it - seems to ensure the protection of democratic principles and general interest above anything else.

3. Fossil fuel companies are the culprits of climate change

When reporting on climate change, the mainstream media narrative tends to focus on our individual responsibilities in the crisis (we need to change our lightbulbs, recycle, etc). Consequently, the weight of huge corporations is often overlooked.
Nevertheless, big business is in fact historically responsible for climate change. A study has shown that 90 companies are directly responsible for over 60% of historical emissions.

Fossil fuels, transport, cement, agri-business... Big business has been the principal driver of climate change - and generally speaking it's been the key actor in the establishment of our current extractivist, productivist, capitalist system that's warming our atmosphere.

4. Big business's interest is directly opposed to ours

Big business' number one concern is making profit, and the fossil fuel industry is the most profitable economic activity the world has ever seen. That's partly thanks to public subsidies. In fact, according to the International Energy Agency, the fossil fuel industry receives $550 billion a year in subsidies, more than 4 times what renewables get. Fossil fuel companies also enjoy the luxury of not having to pay for negative externalities linked to climate change.

If we want to be serious about climate change, we're going to have to leave 80% of fossils in the ground. Science says so, and even the controversial World Bank has recognized this fact. For the fossil fuel industry, that means giving up on 80% of its wealth. And that's just to stay under the 2°C limit - a heavily criticised threshold. What businessman, w

hat CEO would accept terms such as these? Big business's interest are in direct opposition to ours. This isn't just theory, we witness the fundamental unwillingness of big business to take climate change seriously daily:

Every time big private interest is in the balance, decision makers are targeted by lobbyists aiming to protect their profits and business model. A staggering 30 000 lobbyists work in Brussels alone. The list of sponsors of the COP 21 includes Air France, car companies, Ikea, the dirtiest companies in the world.

For this reason, the World Health Organisation has banned tobacco companies from attending its events, citing the obvious conflict of interest at play. Why would climate change require anything less?

Major corporations that continue to profit from climate change have everything to gain from deluding the public they are taking action, to ensure the system doesn't change. For the past 150 years, the deal has been pretty sweet for dirty industries. Why would they let that change?

We don't need to defend big business. Big business defends itself just fine. It pays people to clean up its image, and it pays a marketing department to greenwash its investments. It's not a public institution's job to make sure private interests are taken care of. Why do we never hear politicians and the mainstream media deplore the limited inclusion of impacted communities in decision-making? Of First Nations? Of women? Is this not another sign that corporate influence has gone too far and should be reduced?

Let's be honest. A fair and just energy transition implies winners and losers. The fossil fuels industry knows this, and that is why it's trying all it can to keep "business as usual" going. Big business cannot be a part of the solution to climate change. On the other hand, our decision-makers' duty is to represent the people and protect the most vulnerable. We don't need politicians that speak for big business, we need politicians who defend the general interest and constrain corporate power.