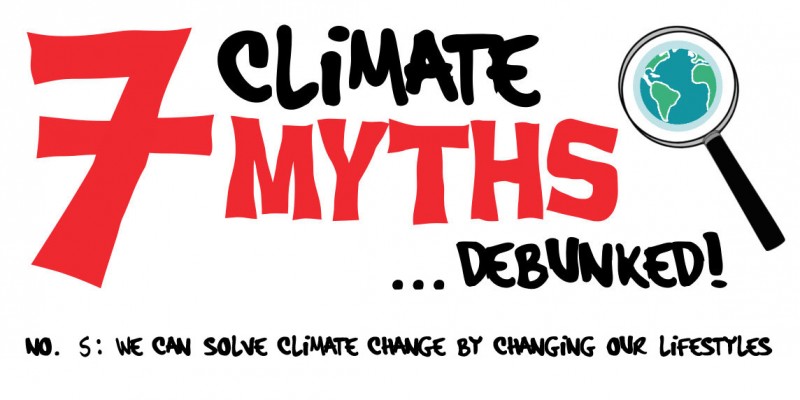 Climate myth #5: We can solve climate change ourselves by changing our lifestyles

In the run up to the COP21 UN climate talks in Paris this December (more here on how to join us and take action), we're busting some commonly-heard climate myths, from big business being part of the solution to putting our faith in techno-fixes. Catch up with last week's mythbuster - "We need an agreement at any cost."
Comments or questions about this article? Come and find us on Facebook and Twitter.

When it comes to climate change, it seems we always hear about one magical solution in particular: we just need to change our lifestyles. "Stop driving your car, stop eating meat, turn off the lights when you leave the room, buy eco-friendly products... and you will save the world from climate change," we hear.

Our objective in this myth-buster is not to criticise the adoption of a more eco-friendly lifestyle; rather, we want to show how this argument is used by people in power to distract us from the real causes of the climate crisis, by shifting responsibility from the system to individuals. We'll talk about how this solution is strategically beneficial for companies, to increase consumption levels and hide their own devastating impact, and how it transforms the victims of climate injustice into its perpetrators, by generating feelings of guilt among individuals.

1. People's behaviour is not the main cause of climate change

If we could solve climate change by changing our lifestyles, that would mean our lifestyles are the main driver of climate change. This is not to say that we are powerless as individuals or collectives: our actions are vital in putting pressure on companies and governments to change. But the perspective of being the sole culprits isc highly misleading.

First of all, in myth #1 we showed how responsibility for climate change falls on the shoulders of big business. Between 1751 and 2010, 63% of all global industrial greenhouse gas emissions came from just 90 companies. This telling statistic illustrates how concentrated emissions are amongst a handful of corporations. These included 50 investor-owned firms such as Chevron, BP, Shell and Exxon, thirty-one state-owned companies such as Saudi Arabia's Saudi Aramco, and 9 government-run industries, mainly producing coal in countries such as Poland and China. What's more, half of these emissions have been produced since 1988.

Furthermore, because of global and national levels of inequality, responsibility for climate change is not equal across the 7.3 billion people that currently share the Earth. A recent study has shown that the top 1% emit 2 000 times more greenhouse gases than the bottom 1%. Apart from the fact that the super-rich probably wouldn't be very keen to live a more austere life, this also shows that a select few individuals are massively contributing to climate change. Finally, historically, 80% of greenhouse gases have been emitted by the Global North. Talking of "lifestyle changes" erases these differences by implying all of our lifestyles and responsibilities are comparable. This is simply not true.

In this day and age, with rising awareness of environmental problems, most companies seek to present themselves as socially and ecologically responsible. This strategy of adopting a "green" business model is used to increase levels of consumption, as they present greenwashed products as ethical. Ecology is used by multinationals to reach out to new markets, eco-friendly consumers, to maintain (or even amplify!) their profits.

It also shifts the perspective of the general public from the real drivers of climate change to their buying habits. The salvation of the world is packaged in recycled materials in the bio supermarket. Companies rely on feelings of individual guilt to market their products: preventing climate change is portrayed as a moral problem, resting on the shoulders of ordinary people who could choose a better lifestyle.

Unsurprisingly, the very same companies actively divert attention from their own devastating impacts and footprint. For example, Starbucks aims to present itself as an ecologically responsible company, but many of their products use palm oil, the use of which is amongst the reasons behind the ongoing ecological catastrophe in Indonesia. The clothing brand H&M constantly presents itself as very conscious of environmental problems... even as the company thrives on inherently unsustainable "fast-fashion".

Because of the weight of the system, it is in effect extremely difficult to genuinely "live green". A few examples demonstrate this very simply. When we compare travel prices of coaches, trains and planes, the more you pollute, the less you pay. The difference in price range is particularly striking between train and planes, where it is often now more cost effective to fly - despite the environmental impacts - than to travel over land - despite the environmental benefits. This is a result of decision-making that has favored the airline industry and consumerism all of which contributes to the pushing convenience-led lifestyles.

Another example is the use of individual cars. We all know we should be driving less - but how can we expect people who have no access to public transportation to avoid buying and using cars? Planned obsolescence also works against us: many products are designed to break down after a certain point, and it's usually cheaper to buy a new product than to repair it. Sometimes repairing products is even made impossible. These types of business models encourage waste and mass consumption - both of which contribute to climate change - and individuals do not have the power to influence these structures.

As we mentioned above, the palm oil industry was one of the main causes of the fires in Indonesia. Palm oil is a favourite market commodity, as it is very cheap with many potential uses. Most food and cosmetic companies (for example Unilever, Ferrero, Nestlé) add this substance to their products. Elsewhere it is used directly for fuel. Palm oil is so widespread that it would take a lot of time and energy to detect its presence in everyday commodities, and alternatives are more expensive.

If we could account for all the chemicals contained in cosmetics, the hormones in meat or pesticides in soil, we would need a lot of free time and excellent investigative skills to successfully avoid unethical and unhealthy products. You can buy fair trade products, but they are expensive, and the promises of the packaging sometimes hide uglier truths.

All these issues share a same systemic cause: we place profit before the health and security of the people. As long as this system thrives on climate change and the devastation of countries from the Global South, our individual choices will never provide an adequate solution.Trying to genuinely live green in our current context is swimming against the current.

4. Living green is a privilege

Adopting an eco-lifestyle is not only difficult, it's also a social privilege. Food is a good example to illustrate this point. Ideally, we should all buy organic, local food, and primarily buy fresh fruits and vegetables. But as industrial farming is heavily subsidised, and because of food deserts, eating quality food is made very expensive, and unaffordable to the majority of people. Not everyone can afford lifestyle changes.

Often, the narrative behind lifestyle changes is also very exclusive. For example, criticism of mass consumption doesn't take into account people who live in deep financial precarity. "Buy nothing days", that aim to raise awareness on consumerism, never address the fact that many people consume practically nothing... because they have no choice!

"Living green" is costly, both in time and financially. To really apply eco principles to their life,, the ideal ethical consumer would have to be rich, patient, thorough, and with plenty of time on their hands. That doesn't apply to the majority of people, in the North or South, which shows just how privileged this narrative is.

Living green isn't only a privilege, it also has negative consequences. Instead of underlining the links between social inequalities and environmental injustice, the "green lifestyle" line of argument actually feeds the narrative that "poor people pollute more", when it's the exact opposite, as mentioned above. The discussion on class and privilege is effectively derailed.

In the world we live in, living green often leads to feelings of superiority, and prevents the formation of solidarity between different groups that need to deal with the same problem. Thus, focusing on individuality can create a gap between the middle class and lower class, as poor people cannot afford that privilege. The perspective of the upper and middle class shifts responsibility from companies to poor people, from polluters to victims.

We see this mechanism in many countries across Europe. When it comes to social problems, we can hear accusations targeting poor people for their financial situation - even more so if they are people of colour. It's implied they somehow "chose" poverty, which is only a consequence of their alleged "laziness", "dullness", "inferiority". The same victim-blaming is at play with environmental injustices. Just as poor people, North and South, bear the brunt of the failures of this system (fuel poverty, food prices, pollution...) they are presented as the perpetrators of their own suffering. With this frame, there is no place for climate justice.

To conclude: People are not the problem, they are the solution

Focusing on individuals renders the system invisible - but climate change is a systemic problem, requiring a systemic change. When the narrative shifts from "we need to change the foundations of the system" to "we need to shop differently", the story has been derailed. We've moved from a discussion on extractivism and leaving fossils in the ground to a conversation on light-bulbs and plastic bags. As long as we're talking about the handful of people who manage to live completely green in the Global North, we're not talking about the food industry, the waste industry, the packaging industry, the fossil industry, etc. The responsibility has shifted, and the influence of real culprits is made invisible. Focusing on lifestyle changes depoliticises the issue. It doesn't take into account the discussion on privilege, be it Global North / Global South or class injustices.

It makes little sense to discuss climate change at the individual level because the system constantly shapes our individual choices. Lifestyle changes are only relevant if they bring about movements that can shift the balance of power.

As young people from the Global North, we are conscious we have a responsibility to live in a more sober way. We do need to eat differently, travel differently, consume differently. Our carbon footprint is excessive. But we also know this situation is the result of a system and requires a system change, not individual epiphanies... We need collective action for social transformation. We need a systemic change of food, energy, and market systems. We don't want green capitalism, we want climate justice. We don't want to paint this system green, we want to change it.

"We will not shop ourselves out of climate change" - Naomi Klein