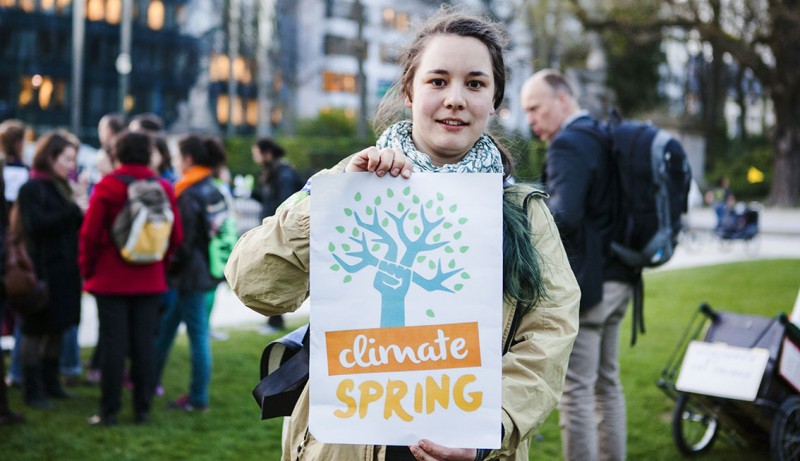 Climate change is happening here and now. Rising sea levels threatening our coastlines, droughts in the Mediterranean region, terrible floods and ice storms in Central Europe... The urgency is clear.

At the same time, all over Europe, people are taking action for our climate, everyone in their own way: bravely resisting shale gas explorations in the UK, Ireland and Romania, fiercely opposing dirty coal fired projects in the Balkans and Poland, rallying people against false solutions like nuclear energy in France, and passionately making happen clean and democratic alternatives like solar power in Germany...

All this braveness and tireless enthusiasm to create a better world is linked to one central struggle: the fight for our climate... and that is where Climate Spring comes in.

It connects us all and at the same time it shows the world that the European climate movement is stronger than ever before.

What is Climate Spring?

It's you. It's the activities that are aimed to tackle the climate crisis. It's the climate, energy and environmental events and campaigns you've already planned with your group, but it can also be something entirely new. Climate Spring is about actions and about people. People, who take action on local, national and regional levels. Climate Spring is the umbrella to bring it all together and connect us all, as united we are much stronger.

Climate Spring was by Young Friends of the Earth Europe and Push Europe. 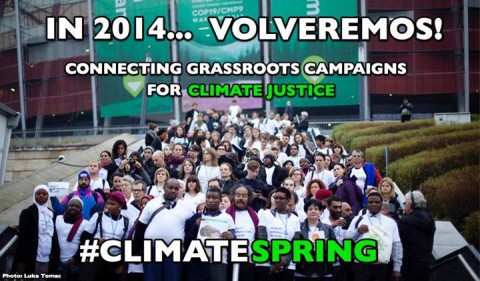 Why are we organising Climate Spring?

In the last few years we realised something important: there is a huge climate movement in Europe on the local and national levels, fighting for the environment, educating people on the environment, resisting dirty energy projects, promoting democratic clean energy... But there is very little cross-border connection between groups and movements, which allows decision makers and the media to water down the size and importance of our movements, and claim that there isn't enough public pressure for action on climate change.

We know this is not true. We know that there is a big and growing movement out there, and our vision is to show the size and strength of the movement, to corner decision-makers and push for action on climate change.

Our goal is to connect the diverse struggles happening all over Europe over the course of the spring, in order to make the strength and power of civil society visible.

Why do we need to show the strength of the movement?

Powers have shifted in the last few decades. The neoliberal agenda is putting profit before people, big fossil fuel businesses are having overbearing power over politicians, pushing private greed over public interest, and undermining the fundamental principles of democracy with their aggressive lobbying efforts. These are the root causes of the climate crisis we are facing. In addition, the economic crisis is another proof of the unsustainability of our system: we need to radically transform our economic model which is fueled by dirty corporations. System change, not climate change.

While the climate issue is still poorly understood by the general public, we all need to promote the benefits of a real transition towards a sustainable and renewable system model: job creation, restoring democracy, community power - decentralisation of energy systems which are now mostly in the hands of big corporations, energy sovereignty, improved air quality and health, a better quality of life...

By showing the strength of our movement, and enabling it to grow further, we can create the political strength which could allow us to shift the power back, to reclaim the power that belongs to people, and not the polluters.

How does Climate Spring work?

Absolutely decentralised. There is a website. All you need to do is to add your activities that you're going to organise anyway, or shout for help if you want to organise new things. The team will ensure it's all in one place, it's visible, and most importantly: it gets the message for climate justice out there.

Who can join and what can we do?

Whether you're involved in an organization or you're a concerned citizen, whether you already have something planned or you want to plan something specifically for this campaign, whether you work on local, national or European level... join in !

Direct actions, creative and artistic workshops, film screenings, digital campaigns, urban gardening, conferences.... the only limit is your imagination. An action kit will also be made available.

When are the best moments to take action?

Spring is an ideal time to get active. In April an internationally recognized group of climate experts (Intergovernmental Panel on Climate Change) will publish their latest report on climate change. In their report last year, they have concluded with absolute certainty that humans are not only causing, but accelerating climate change.

This year, the European Union will be deciding on objectives to fight against the climate crisis. All signs point towards a weak political response despite the strongest scientific warning ever.

It is clear that we have the movement, we have the activities, we just need to pull everything together to show our force, and increase the pressure to put the climate back on the agenda!

We want to bring the people of Europe together with a simple message:

Let's take action for our climate !