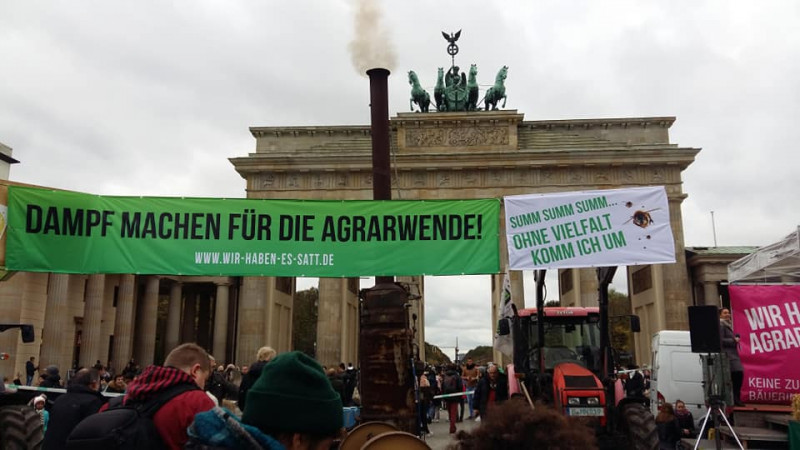 Make steam for a better agriculture!

Good Food Good Farming - Stories from the Days of Action

On 27-28th of October, Young FoE groups accross Europe got involved and organised food tastings, debates, movie screenings, cooking and seed bombing workshops... All these actions were targeted on bringing local people together (consumers and farmers, young and old), and provoking the discussion on the failures of our current food system as well as how to create a better one for tomorrow. Here are some stories from our national groups.

YFoE Scotland organised an 'Eat-In' in a public park. Several farmers and other local people brought local products to share with each other and passersby. This was an occasion for people to stop for a while, taste local productions talk to local farmers and discuss on the topic of local food (how it is produced, how to support it).

YFoE Ireland's event was focused on Food Sovereignty and how it can tie people from different social and physical spaces together. The event included a presentation from 'Foodture', a social enterprise which connects people with local, sustainably produced food, another presentation from 'Concern' on the similar issues being faced and resolved in African nations. There was also a panel discussion featuring representatives from YFoE, a CSA farmer and a PhD researcher on the topic of 'Food in the Era of Industrial Agriculture'. The evening continued with a potluck dinner, a 'speed greeting', and finally some music to close off the night.

BUNDjugend made steam in Berlin

BUNDjugend joined BUND's march in Berlin for an agricultural turn. 1000 people in total walked for bees, biodiversity and farmers and gathered around a same common message: "Taxpayers' money only for farms and insects friendly agriculture!".

On Saturday night Young FoE Macedonia organised a movie screening (Food Inc.) with the help of Slow Food Youth Macedonia. The movie was followed by a lively discussion on the industrialisation of agriculture, plastic waste and the difficulties experienced by rural young people who end up moving to bigger cities. There was also a very interesting talk on EU and Macedonian subsidy systems and GMO regulations.

Involving all generations in Hungary

On October 28th Védegylet participated in Zöldgömb Fesztivàl (GreenGlobe Festival), an event that wanted to draw the attention of the smallest to the eldest on environmental issues, and give them an instant green education while having fun! Several activities were organised for kids, but also for the kids at heart : transition stories colouring activities for those who were in a drawing mood, for those who wanted to get their hands dirty the seed bomb workshop awakened their inner activist side for future guerrilla gardening; a quiz about food waste that inspired great conversations about what does good food and good farming mean. Finally, some people shared their opinion by participating in the CAPsnap campaign!

As Russia is big, many activities happened all over the country, in different regions. The days of action happened at the same time than the FoERus Annual Conference, which was a perfect timing for sending a strong collective message! The regional activists gathered and made a solidarity picture as a support for Good Food Good Farming.

In La Rioja, the YFoE local group organised a hike through a natural area known as "Molinos de Ocón", a beautiful and small town of La Rioja cataloged as Biosphere Reserve. Participants visited an Ecological Chicken Farm "Huevocón", a family project of sustainable and alternative poultry farming that respects the standards of animal welfare. The day ended with a picnic and with a small agro-ecological gymkhana, with traditional games for all the participants, specially for children and young people. An unforgettable day!

An information stand in Zaragoza

Amigos de la Tierra Aragon set up their stand in the agroecologic market in Zaragoza and met agroecology farmers, activists, passers-by... They talked with many supporters of a socially, economically and environmentally sustainable model of consumption and had a lot of interesting conversations around good food and how to base our food production on food sovereignty.
For this reason, Amigos de la Tierra will continue on going out in the streets to call for a farming system that is suitable for the planet, fair for people and for the animal well-being.

Interested in learning more? Check our YFoEE/Slow Food Youth Network interviews of small scale and sustainable farmers, who tell you more about their work and why we need a different food system.

This project has been funded with support from the European Commission. This website reflects the views only of the author, and the Commission cannot be held responsible for any use which may be made of the information contained therein.