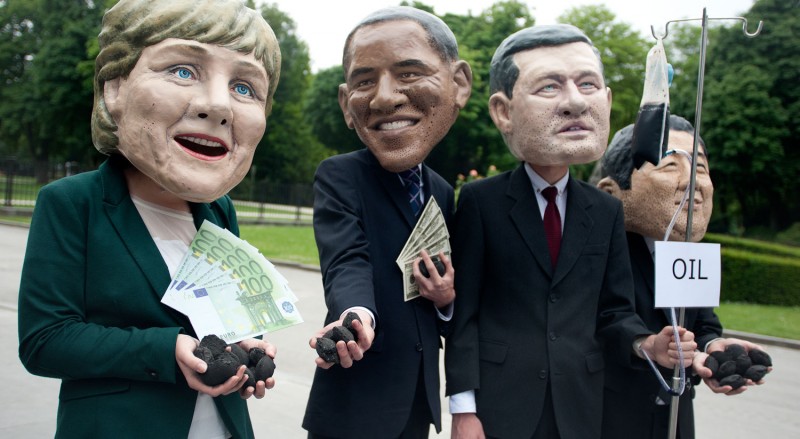 Leaders of the Group of seven (G7) countries must break their fossil fuel dependency, and invest in genuine solutions to energy security, like energy efficiency and community-owned renewables, demanded Friends of the Earth Europe today.

As international climate talks resume in Bonn today, two months after climate scientists warned of climate-change-related risks from extreme events, leaders of the G7 are meeting in Brussels to discuss topics including the Ukraine, climate and energy.

G7 countries must not misuse the Ukraine crisis to fast-track further fossil fuel development – including increased shale gas trade and development and to opening Europe's doors to tar sands, the dirtiest fossil fuel in commercial production. G7 countries should instead focus on sustainable solutions to Europe's energy security, according to the organisation.

Colin Roche, extractives campaigner for Friends of the Earth Europe said: "Under the guise of energy security, G7 leaders are pushing a corporate-driven agenda of dirty energy. This will lock in fossil fuel use for decades. The only path to energy security is to break the stranglehold of fossil fuel imports, prevent further shale gas development, and develop our own clean, community-owned renewable energy resources."

The EU's proposal for its climate and energy targets for 2030 – the 'EU 2030 package' – are already dangerously inadequate according to the organisation. Europe spends billions of euros every year importing dangerous fossil fuels which contribute to climate change. Europe should improve its energy security by enacting three nationally-binding targets: to cut greenhouse gas emissions by at least 60% by 2030, to reduce energy use by 50% and to increase the share of renewables to 45% [1]. In addition, the EU must provide finance for developing countries to help them to tackle climate change.

Susann Scherbarth, climate justice and energy campaigner for Friends of the Earth Europe said: "We walked out of the climate talks in Warsaw in frustration at the toxic influence of dirty energy corporations on the talks and the positions of many national governments. We're seeing the same story with the G7. Instead, Europe needs to leave fossil fuels in the ground, and promote greater energy efficiency and community-owned renewables – to deliver a more secure future for us all."