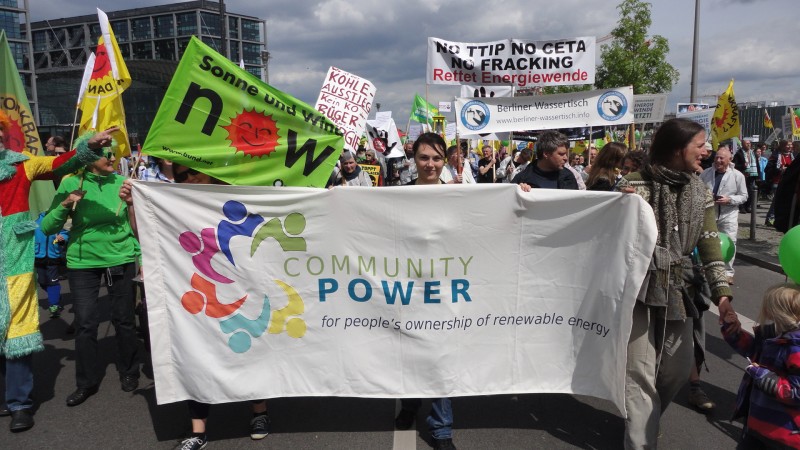 Over 12,000 people gathered in Berlin today to drive home the need for community-run, renewable power. The demonstration, organised by BUND/Friends of the Earth Germany, comes as the German government discuss the country’s energy future, and in response to the government’s plans to cap the expansion of renewable energy sources like wind and solar.

The day began with 120 boats floating past government buildings, delivering a visual message: don’t let plans for renewables and community power sink. The demonstrators made a colourful and impassioned case for an Energiewende (energy transition) towards locally-run green energy projects – business as usual, with dirty energy like coal, shale gas and nuclear, is simply not an option.

Hubert Weiger, chair of Friends of the Earth Germany said: Our government’s plans to amend the Renewable Energy Act will block the energy transition; it should be doing everything possible to speed it up. Germany is facing an important decision. It must not let a few big energy companies dominate the development of renewable energy; instead the energy transformation needs to happen in a fair consumer-oriented way where people lead the way.” 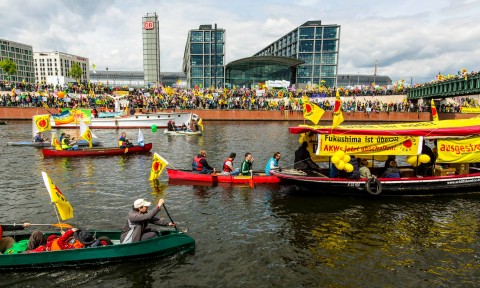 The demonstration illustrates the massive public support for renewable energies, and is part of Friends of the Earth’s nationwide campaign in opposition to coal, nuclear and fracking for shale gas in Germany. Concerns were also raised against TTIP, the EU/US trade deal that would wreck green energy development.

Earlier in the year, BUND/Friends of the Earth Germany oversaw over 30,000 people protesting for a strong energy transition across seven major German cities. In each case the message was clear: we need a clean, safe energy future that puts people at the centre, not polluting corporations.

Photos/blog from the demonstration (in German), May 2014